> History of the Muscat de Lunel 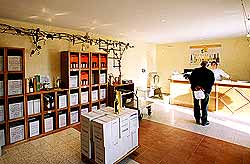 We generally consider that vine has been first imported to the Occitane coasts by navigators and Greek traders towards 600 BC. Those populations have planted more and more vineyards, developed agriculture techniques, like cutting, and selected best grape varieties. Thanks to them, the wine trade has been developed up to reach an important role during Roman colonisation.

At Ambrussum, some residues of combustion have been found. They attested the use of vine stocks since the II century BC for baker’s oven heating. Many theories said that the first vine known would have been a Muscat wine. It's sure however that this vine has been for ages considered differently than others.

At the XIII century, Arnaud de Villeneuve discovered the secret of fortified wines, which are the basis of the Vins Doux Naturels. At the Middle Ages, the Muscat Wine was sold as a regional product. Its trade really increased because of a general period of expansion. An evolution of life conditions, with new needs and new tastes

Muscat wine was very appreciated at the Royal Court, so much that Jeanne d' Evreux, the wife of Pierre IV D'Aragon, wanted nothing else as wine than Muscat. However, this is the institution of Papacy in Avignon that really contributed to Muscat wine fame.

In 1647, when the prince of Conde stayed in Lunel, he drank Muscat wine. Louis XIII, three times in Lunel, also drank Muscat, as well as Richelieu and Mazarin.

At Lunel-Viel, Muscat vineyards are located in the north of the village on the hillsides covered by rounded pebbles; the “Alpine diluvium”. Also in Pioch de Larboux - Costebelle - Les Devezes – With areas rarely larger than an hectare.